Zombies are like the scariest version of human beings. They set an example of the mad desires in every human. They are deadly monsters that can spread like a virus. Arizona Sunshine is an awesome Virtual Reality (VR) game that will take you into a parallel world. From a common man, you become the survivor of a zombie apocalypse. VR games are played by millions of players around the globe. Arizona Sunshine is one of the famous VR games, which is ruling the market at present. When the whole city is been destroyed and only a few survivors are left. You and your troop will shoot the nearly alive creatures roaming around. Get ready for this amazing shooter video game and make the best of it.

Arizona Sunshine is a shooter video game, based on the zombie apocalypse. This game was released on 6th December 2016. Vertigo Games and Jaywalkers Interactive developed Arizona Sunshine and was published by Vertigo Games. It is a first-person shooter game and the whole plot is composed by Jonathan Van Den and Wijngaarden. In these five years, Arizona Sunshine has received positive reviews from many publications. This game is all about blasting, beheading, and shooting the zombies.

The journey of the players starts in a cave in the Arizona river valley. Suddenly zombies arrive from nowhere and the gamer needs to kill all of them to survive. While you try to escape from that place, you find a radio. When the radio is turned on, you hear a human voice on the other side. After a long hunt, another radio gets discovered. It comes to the light that the messages are been sent from a refinery, but unfortunately, that place is destroyed by the zombies. In this story, the player can take shelter at the refinery and begin the journey in the morning.

Arizona Sunshine is a hopeless place. What else can we expect in a zombie apocalypse? Things turn out to be more challenging the next morning. Without shelter and food, the player needs to continue the voyage. There will be times of breakdown in this frightful situation. All you need is the courage to fight back the dead creatures. After following the radio signal, you will reach Sunshine city. In that deserted town, you realise that no one is alive and the voice from the radio was automated. The world shatters in front of your eyes. With no more hope and energy to fight back the zombies, you scream. And suddenly you find a ray of light from that darkness.

The fight for survival begins from the riverside. In the adventure of Arizona Sunshine, you need to use the motion controller to play the game. You can attack the zombies with firearms using a motion controller. You can keep one or more firearms for shooting the deadly creatures. You need to explore the forest and every corner of Sunshine, on the way you will receive more advanced weapons. Wash up the incoming waves of zombies like a pro with those guns. As you play Arizona Sunshine and proceed to further levels, the difficulty will also increase simultaneously.

There are two different modes in Arizona Sunshine. In Campaign mode, you explore the surroundings and finish the zombies on your way towards the rescue point. On the other hand, you need to fight outnumbered zombies in Horde mode. Here, you will be fighting from a small camp against thousands of blood-thirsty zombies, which are moving towards you. Let whatever the platform be, the players always need to defend themselves to proceed further in this game.

Arizona Sunshine is the battleground of death and life. The horrifying zombies are not going to leave you alone. Such genre games are very famous among gamers. No one would take any chance to leave this opportunity. This game is popular for its Hollywood-like catchy storyline and fabulous features. Some features of Arizona Sunshine are:

In VR games, proper visual effects and background music are very important. The developers have minutely crafted every object gracefully. The dynamic light and shades make the experience even better. The 3D graphics quality and the soundtrack have done their job properly.

Arizona Sunshine has two different modes for the players. You can play the Horde mode to fight with numerous zombies for a short session. The Campaign mode has some extra twists, this session takes time. In the campaign, the mode you can explore more and take part in all events occurring in the city.

Players can either be a loner or play with a team. In Arizona Sunshine, the developers have created both the playing modes. You can easily unite with your friends and fight against the rotten zombies. This platform is open for both multiple and single players both. Single players can also enjoy the game equally and play like a pro.

Isn’t it amazing that you can choose the level of difficulties in Arizona Sunshine? This is a great feature for the new players, who can go with the flow easily. Personalise the number of challenges you want to face.

There are more than twenty-five firearms in Arizona Sunshine. Each one is different and better in their way. The guns look very realistic; these are used to blast or shoot your enemies. You can carry them on your shoulders or arms.

The game content is no less than a Hollywood movie, which is based on the zombie apocalypse. Arizona Sunshine is the best platform for hard-core gamers. There is entertainment, action, fun, and thrill at the same. And the storyline is fabulous; the whole plot is so well designed that you would be able to relate to the character. So, what are you waiting for? Get your guns on and begin your journey in this deadly city. 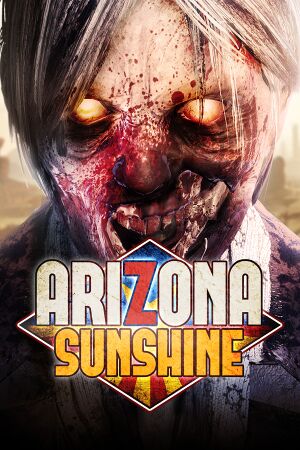 How many players can play at a time?

You along with four other players will be able to play Arizona Sunshine as a team.

On which platforms I can play Arizona Sunshine?

Can children play this game?