A paradigm in card roguelike is the Doors of Insanity. The player can make his way through endless choices of a doorway with exciting mystic secrets and battles that are fully on. Customization of characters with artifacts, armor, and cards is enabled in this game. This game is an entire role-playing game in a single run, packed with full of adventure and fun. The player should make the right choices to survive the rose castle. Read furthermore to know more about the scam and exploit yourself with mystic novelette.

About Doors of Insanity

This card battler deck-building game holds a couple of mixed reviews from the gamer community but most of it is a positive review status. Doors of insanity were released on 27th January 2022 and were published by Neon Doctrine as well as developed by One Shark. 2D visual effects with anime-like characters are displayed in this game with dark humor and multiple endings. The player of this amazing game is allowed to set the language, music, and sound settings at first with fast mode either on or off.

Gamers are first directed to the Crystal shop to customize the weapons, tools, characters and choose the destiny of their choice. Then the game directs the player to the fancy deck builder in which cards can be chosen and after which it leads to three different doors such as the Baal, Goddess Aora, and Mad Lad Balar. As the player enters into any of the doors, he is directed furthermore into three different doors of secrets in which one holds the terrifying monster which the player has to defeat using the cards.

Once there is victory, as reward gold coins and additional three cards are acquired by the player to choose. With which he has to unlock the secret doors to defeat various distinct creatures that are present inside, and after the battle, the player is rewarded with weapons, armor, cards, etc. This stresses the objective of continuous random unlocking of doors, as the protagonist customizes the game characters initially which determines the game style.

Amazing features including customized settings and controls with an exploration of weapons and artifacts are listed below.

Various options for customizing the game are provided initially in the game which includes the setting of sound volume controls, resolution, fast mode, language, delete progress, exit game and reward codes are exclusively available in this game. Players find this game easier to access and jest to play.

Players can improvise the protagonist’s character between different runs as well as build or create new gods in the ambit of madness. An updated feature of using and collecting more than 50+ cards while preceding the game is constantly available in this game. Doors of insanity players can summon demonic bugs, wizards, and shield beaters as stalwart allies within the game.

Magical artifacts and weapons are of wide range in this game. While such a variety of mystical weapons including the mighty Sword of the three saints and a scarcer yet powerful Dad’s hammer can be flaunted. Talking of the artifacts players can equip mystical artifacts which change the approach of the game.

Doors of insanity enable the player to engage in an endless number of encounters that are hidden behind the secret doors of this game. This allows the player to come up with new ideas of using the cards against foes present inside the doors. Four huge areas are allowed to travel by the player, which contains individual encounters, secrets, and enemies particularly located in each area.

Doors of insanity is a delight for the players who enjoy roguelike card games. Never miss journeying through the endless number of doors in this game. 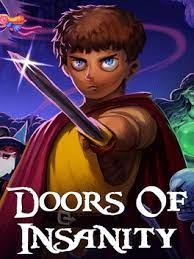 This game was published by Neon Doctrine.

What type of characters is depicted in this game?

Anime-like characters are depicted in this game.