Have you ever experienced lonely and scary nights in your childhood? That was a time when a boogie-man even scared us. But one fact is that nothing can match a child spirit. Do you want to revive those scary nights once again? Do you want to relive those experiences and fight back your fear? If yes, then let’s play Five Nights at Freddy’s 4. A horror-survival game, that will take you right back to your old childhood. This time the fight is not with anything else, but the terror has followed you down your comfort zone.

About Five Nights at Freddy’s 4

Scott Cawthon is popularly known for developing scary games. Players have enjoyed the past 3 sequels of Five Nights at Freddy’s. Now is the time for the fourth sequel; it was published by Scott Cawthon and released on 24th July 2015. This time the fight is not outside but inside your room. You will have to survive the nights alone in your bedroom. But be careful, the monsters might appear from anywhere.

The survival journey of your character lasts till 6 A.M. They might be under the bed, in the closet, behind the doors or even behind you. This time Fazbear, Chica, Bonnie Foxy and mysterious shadows return together, to scare you. But, you must be courageous and fight back the creatures.

How to play Five Nights at Freddy’s 4?

In Five Nights at Freddy’s 4, the players can only defend themselves. This time the security office is replaced with a child’s bedroom. The only weapon you will have is a flashlight. That light has an unlimited battery and it can save you from the creatures. You will be dealing with four kinds of monsters – Bonnie and Chica hide behind the doors; you must look for them and check on their breathings near yourself. But nightmare Freddy cannot be shushed away with the flashlight; multiple small animatronics assembles from it up. So, all you can do is stop the development of Freddie.

Close the closet to defend your character from the nightmare Foxy. Five Nights at Freddy’s 4 has multiple mini-games, which need to be played carefully to complete five fights. Your character must survive the scary wee-hours and deal with the deadly creatures.

Features of Five Nights at Freddy’s 4

This game will give you chills at every step. You never know what will happen next; the developer had put a lot of effort to design this gameplay. Players will be amazed after knowing the features of Five Nights at Freddy’s 4, which are mentioned below:

Five Nights at Freddy’s 4 also features a sixth night, which will determine the loss and win. You have to deal with four animatronics till the fourth night, on the fifth night the large yellow bear will appear. And the sixth night has all of them; they will try to scare you till 4 A.M.

Players can use the function keys to navigate their characters. Five Nights at Freddy’s 4 is a first-person horror-survival game. You can move from one place to another in the bedroom and check on the paranormal activates. With just a click the items can be used.

Five Nights at Freddy’s 4 has 3D visual effects, which will amaze the players. You feel as if the events are happening just in front of your eyes. Every scene has been crafted well and gives the players a live experience. 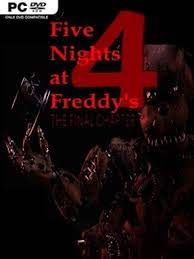 No, you have to purchase Five Nights at Freddy’s 4.

How much space is required?