If you are a sucker for action RPG, you are in the right place. We have just the game that you may like.

Experience the war-torn lands of 17th Century Eastern Europe as you have never before. Yes, you guessed it right! We are talking about Mont & Blade: With Fire & Sword.

The game is developed by TaleWorlds and Sich Studio and was published by Paradox Interactive in Europe. The storyline is a loose adaptation of the novel With Fire and Sword by Henryk Sienkiewicz.

If you have played Mount & Blade: Warband before, you will find a lot of similarities between the two. If you are intrigued to know more about this game, you must give this article a read.

What is the Mount & Blade with Fire & Sword about?

As already mentioned above, Mount & Blade: With Fire & Sword is the sequel to the game Mount & Blade: Warband released by TaleWorlds Entertainment and Sich Studio. The game was released on May 4, 2011, in Europe and North America.

For those unaware, the game is based on the fiction novel With Fire and Sword by Henryk Sienkiewicz. The storyline is set in 17th century Eastern Europe. This game takes you on an action-filled journey to freedom, riches, or domination. Five nations battle each other in greed for power and control over their destinies.

The game is set in an open sandbox world where you form allies to defeat your enemies, conquer castles, and complete quests. The combination of a mind-blowing combat system and high-end firearms adds extra excitement to the game.

You can use these weapons and firearms to combat and quickly defeat your foes. Along with the single-player mode, the game also comes with a host of multiplayer content including the Captain mode.

The game has got several exciting things like customizable armies, option to dress up the soldiers with weaponry & armor. You also have additional quest types and adventures to embark on.

There’s a new economic system, which includes a banking system, village/town development, & new trade options. You will be allowed to keep money on deposit, apply for loans, and arrange caravans.

The game has also got multiple endings that make the game more interesting. Every scene features deeply researched historical components. This ferocious game gives players the taste of true action.

The game is very similar to its predecessors. It allows you to complete quests, and create an army. With Fire & Sword, the main quest lines are for the Polish, Cossack, and Muscovite factions.

The biggest change made in the game is the inclusion of new firearms. You will find a wide variety of firearms and each of them causes heavy damage. The only problem is that they take longer to reload. You are also offered grenades which can be used to cause damage to groups of enemies.

You will also find changes made to the warfare techniques. Not just that, but capturing castles has also become more difficult to achieve by force. This is why you have new siege options available in the game. This includes bribing a guard, blowing a hole in the wall, or poisoning the water supply.

Another new thing is the option to build a ‘wagon fort’ from the camp menu. It is a triangle-shaped barricade that forces infantry to go around it. However, it can be jumped by horses.

They have also made changes in troop recruitment. In villages, you can only recruit weak militia. You can find stronger recruits in the Mercenary Camps as they have more upgrade potential. But the most effective soldiers are the ones that are recruited from Commanders.

You can walk around the villages, towns, and fortresses to explore the game environment. In towns and fortresses, you will find many new options.

Features of the Mount & Blade: With Fire & Sword

Mount & Blade: With Fire & Sword is packed with many great features that you will love to try. It is because of these features that the game feels so interesting. It can hook you to the storyline right from the start. But before you try out this game, take a look at the features below.

The storyline is loosely based on the cult novel, “With Fire and Sword”, written by Henryk Sienkiewicz, who is a Nobel-prize-winning Polish author. The gameplay is set in the lands of 17th century Eastern Europe. This game takes you on a historical journey. You will witness several historical events throughout the game. This is a new century warfare game that brings pistols, grenades, and other advanced weaponry to the battlefield.

The game allows you to customize your soldiers the way you want. You can outfit your soldiers with each piece of armor and weaponry. You build allies to take on your enemies in the battle.

You will come across several quests and challenges throughout the game. You will have to overcome them all to make progress. Some of the quests are difficult, but that’s what makes the game more adventurous.

It has got multiple endings. This is a clever thing to do as it helps to sustain more players and increase the replay ability of the game. Throughout the game, you will encounter various historical components encompassing every aspect of the game’s assets.

The implementation of firearms adds a whole new layer of depth to the gameplay. You will find a wide range of weapons and firearms to choose from. You need to use all of these weapons to defeat your enemies.

Mount & Blade: With Fire & Sword is one of the best action RPGs you will ever play. It is better than the predecessor and also comes with a lot of new changes. With Fire & Sword takes you on a historical adventure in 17th century Eastern Europe. 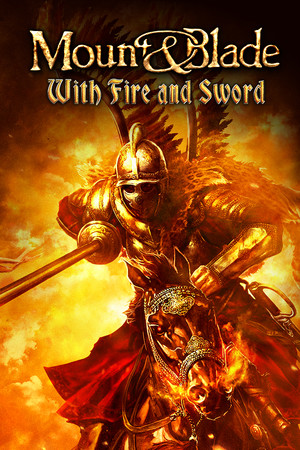 How To Download Mount & Blade: With Fire & Sword PC Instructions

When Mount & Blade: With Fire & Sword was released?

How do you change your kingdom name in Mount & Blade: With Fire & Sword?

To change your kingdom name in With Fire & Sword, first, go to the Camp option and select Take action, and then Change Kingdom Name.

How do I start my faction in Mount & Blade: With Fire & Sword?

With Fire & Sword, you cannot make your faction. You can either join a nation or start a rebellion by capturing one of the fiefs of the nation that you want to rebel against.