Muffin Knight is an interesting, engaging, arena-based action-packed platformer video game that was released in 2012. It incorporates stunning visuals, fairytale characters, each with distinct abilities and powers. The game was developed and distributed by Angry Mob Games. It was released for multiple platforms like Mac, iOS, Android, and PC. This post discusses the gameplay, storyline, and features of Muffin Knight. Let’s continue to read below to know more about this interesting video game.

What is Muffin Knight about?

This game focuses on the journey of a little boy who eats magical muffins, unknowingly. Thinking that he will have a feast, he grabs one of the muffins, but the moment he touched it, it disappeared into the air. The next moment, a magic fairy appeared from the jungle and the boy realised they are magical muffins. The fairy demands the lost muffin. Therefore, she transforms the lad into a knight, the Muffin Knight.

Right from that moment, the goal of the lad becomes the recovery of the most muffins. Throughout the game, the boy will be taken to different locations, with varying scenic beauty and enemies. You have to fight against your enemies and gather as many muffins as possible.

The game starts with players on the bridge level. As players continue to proceed with the game, new levels are unlocked. Each level is different and has a new theme and layout. Friends and foes are also different at every level. No matter at which level you are playing, the goal remains the same. Players have to collect as many muffins as possible. Every time you collect a muffin, you transform into a different character. Different characters have different abilities. Thus the game is extremely unique and diverse. The game offers a total of 18 characters, including guns, fire, skills/ weapons, magic, bananas, and rolling pumpkin heads.

As you explore the game’s contents, you encounter a variety of enemies. Players can shoot enemies with arrows or use a unique special power that comes with their character. We have already mentioned that every time you gather a muffin, you are transformed into a different character. Wondering what would you turn into? You can be a pumpkin, unicorn, archer, and a variety of other characters. But first, these characters have to be unlocked. How would you do that? You have the play and gather the required experience points to unlock these characters. The more enemies you kill, the more experience points would you gather.

The game is more interesting because of its features. It has a varied collection of content that’s sure to keep players glued to their seats. Let’s see the features that Muffin Knight offers:

Stunning graphics surprise players as they play the game. Developers have utilised the latest unity engine technology to the fullest. The game is extremely colorful, diverse, and appears to be magically hand-drawn artwork.

We have already mentioned that players can enjoy being inn18 different characters at different times of gaming. Each character is unique and players get to enjoy their special powers in the game.

The gameplay is simple but engaging. There’s scope for players to upgrade and unlock new characters. The better the characters, the more are your powers. Some characters will fetch you extra abilities during your quests for muffins.

You will encounter different types of enemies throughout your journey. You have to fight and prove your skills by using the right tactics and defeating them in the game.

The best part of Muffin Knight is that here, games can be played with friends online. You can pair with any unknown person and enjoy an engaging gaming experience together.

If you like quick, casual gameplay, Muffin Knight is for you. The game offers a lot of scope to players, letting them enjoys the vast diversity that the game encompasses. The game is full of eye-pleasing visuals that are sure to satisfy you to the core. If you haven’t yet enjoyed the game, it’s time you do it now. 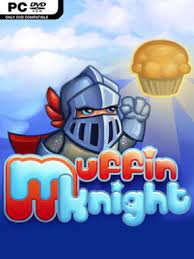 Muffin Knight can be played on iOS, Android, Mac, and PC platforms.

Yes, it does offer a multiplayer gaming mode to players.

How many characters are there in the game?

There are a total of 18 playable characters in Muffin Knight.