In the current situation, going out seems risky, and after work, sitting back home is very boring. Games are the most enjoyable activities one can do instead of getting bored. A lot of games have emerged in recent years. Developers are busy creating new and unique games for the players. One of those games is People Playground.

People Playground is a sandbox game and is developed by Mestiez. The target of the game is killing the androids and humans by stabbing, poisoning, tearing, vaporizing, and crushing the ragdolls in a huge deserted space. The players need to create their tools and weapons for the purpose.

To create their killing tool or machine the game provides those guns, knives, anchors, water, and much more equipment. With the help of these tools and physics, the player can create the most powerful killing machine. It’s quite an interesting game. Here is a brief about what else the game holds in.

People playground is a game of killing characters with different kinds of weapons. You need to start the game by choosing the items of the settings. Stabbing, shooting, tearing, crushing ragdolls, burning, poisoning are the activities in this game. People who enjoy these activities will enjoy the game.

Here every object has some properties, which explain how the object interacts with any other object or people around the world. Some of the equipment here is sharp enough to chop any part of the human body. Like, for stabbing you can use spears or swords. Some of them are even chargeable and become more powerful when charged.

Here you can play with a collection of guns that are unique and different from regular guns. The game also contains various explosives that have various destructive powers and different manners of releasing energies. Players can also build their customized death machines.

The player has full control over everything including the environment and the weapons and the ragdolls. The victims are divided into two categories, humans and androids. For killing the player have to choose either of the two, and their choices depend on their preference. Like if someone wants to see more violence he will choose the humans, as killing humans looks more brutal.

Their inner and outer parts come out after being killed brutally whereas; the scene of killing an android looks less violent. The fastest way of killing a human is by using a weapon. The most powerful weapons are shotguns and snipers, which will rip the player’s victim apart.

Lasers are powerful, however, for killing; one has to aim the laser towards the human’s head or chest. After getting shot by the laser the human will bleed a lot and die eventually. Electric shock is also another weapon to kill the humans in this game. However, electric shock should be given to the human when his energy level is normal. Giving electric shock to someone with low energy will restore his energy instead of killing him.

The game is loaded with a variety of features. It is because of these features that the game becomes even more interesting for the players. Some of the features are as follows:

In the game of People Playground players have the freedom to play in their style. The game has no prearranged objectives and it gives the player complete freedom so the players so that they can do whatever they intend to. There are thousands of ways to kill the androids, humans, and gorses

The game has a huge collection of tools and weapons for the players to make various contraptions. You can shoot, burn, stab, poison, tear, crush ragdolls or vaporise using the weapons. Virtually there are unlimited ways of abusing physics and the ragdolls.

A lot of content is added to the game so that the player gets an exciting experience. Interesting physics with open-ended nature has been applied in the game. The player can create an entire portal that will take them to a new area.

People Playground is a destructive game but the gameplay is simple. You will find a lot of blood in the animations. The game is very realistic which shows real and detailed bruises on the skin after getting burned or drenched in acid.

People Playground is a thriller kind of game that includes hurting, killing smashing. Those who love violence and thriller would love this game. The murders are physics-based. Here the players can also create new stuff of their own like buildings and advanced contraptions. In this game, the player gets to experiment with different forms of physics and create some new weapons. 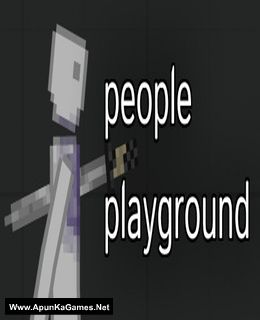 How do you shoot a gun in People Playground?

You have to select the weapon and press and hold the key F; leave the key when you want to shoot someone.

The game is not free but can buy it at a one-time price.

How to reattach limbs on People Playground?

You have to modify the healing syringe or add a new syringe to reattach the limb.

How much space will People Playground take?

How to save contraption?

First highlight it by holding M1 and drag the cursor to contraption and press right-click to find the Save button in the menu.