King Kong is a very famous movie which has stormed over the world. This movie has beautifully projected how destructive humans can be and animals have feelings too. The moment you watched the movie, one thought might have stricken your mind – if you could ever explore the mysterious island like a hero. Well, your wish can be fulfilled in the virtual platform of Peter Jackson’s King Kong. This is a very famous game, which is a replica of the movie King Kong. This game is the result of collaboration between the director of the movie Peter Jackson and the director of the game Michel Ancel.

Right after the movie, King Kong made its success all over the globe; the game King Kong was released on 17th November 2005. This game was developed by the Ubisoft Montpellier and Ubisoft Bucharest. Ubisoft itself has published the game and all the adventurers could not hold themselves. This game became a major hit of the year and received many positive reviews.

The video game starts in New York City, just like the real movie and then it takes the players to Skull Island. This game has main characters like the scriptwriter Jack Driscol and the theatre artist, Ann Darrow. The game follows the same story of sacrificing Ann and how Jack will risk his life to save his love interest from the threatening wilderness of the island.

The video game Peter Jackson’s King Kong can be played from a third-person perspective. Players can be the scriptwriter Jack or the giant Kong himself. The motto remains the same, players have to save Ann and defeat her from all the other threats. It is not easy to survive on Skull Island, players must collect the weapons to defend and attack.

When you play the role of Kong, you will be able to explore the mysterious island and explore them as giant animals. Kong is very powerful; you can use his fighting abilities to attack the threatening creatures. Players can throw objects, punch and bite to attack the enemies. You can pound your chest and chase the enemies; when the sky gets golden, Kong cannot be attacked or harmed. Kong’s strength cannot match Jack’s weapons. This game also has an alternate ending, at the end Kong lives instead of dying. But for this players have to score 250,000 points.

Just like the movie King Kong, the game became very popular. Lots of scenes have been twisted in the game and the interesting features make this game more addictive. You will be amazed at the characteristics of this game, which are as follows:

You cannot find any difference between the gameplay and the movie. The 3D effects will blow your mind. Just like the movie, this game has very realistic scenes; colourful scenery will make you fall in love with the King Kong video game. Kong of the game looks very similar to the movie and the locations of Skull Island too.

Through your journey, you will collect various weapons to sustain on the threatening island. Players can get access to the firearms like a pistol, shotgun, sniper rifle and machine gun; they can also use spears like native spears and bone shards.

You will have to deal with many dangerous creatures in the game of King Kong. Face 13 offensive and destructive creatures like the V-Rexes, Venatosaurus, Terapusmordax, Cave, Serpents, Cunaepraedators, Skull Island Neopedes, Moon spiders and Skull Island natives.

You will get a replica of the movie characters in the King Kong game. Play and interact with Ann Darrow, Jack Driscoll, Carl Denham, Hayes, Captain Englehorn, Kong, Jimmy, Preston, Choy, Lumpy, Briggs and Baxter.

King Kong game offers 40 distinct levels to the players. Imagine how long your journey will be? You can play among the following levels like The Venture, Skull Island, Necropolis, The Wall, Sacrifice, V-Rex, Ann, Millipedes, Kong’s capture, Kong Struck Dows and many more – these are played serially as you can see that the levels are based on the real storyline.

Make your dream come true by playing Peter Jackson’s King Kong. This game is no less than the famous Hollywood movie, but it has alternate endings. You can earn points, unlock the characters and play the game like a real adventurer. Be ready for a never-forgettable voyage in the virtual Skull Island. 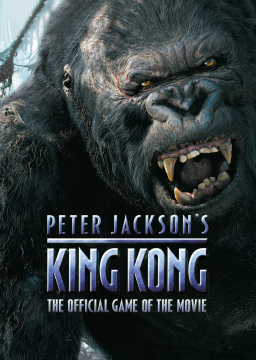 Does this game support multiple players?

No, Peter Jackson’s King Kong can only support single-player.

Do I need an internet connection to play this game?

No, you do not need the internet for playing Peter Jackson’s King Kong.