Developed by Red Blue Games and published by Merge Games, Sparklite is an adventure action indie video game set in the fictional and whimsical region of ever-changing Geodia. The game was released on 14th November 2019 for various consoles like PlayStation 4, PC, Xbox One, Nintendo Switch, and Mac.

Players have to fight against foes in top-down action using a variety of Sparklite powered gadgets, gears, and guns. The game presents deadly regions to be explored and enjoyed. Upon its release, Sparklite garnered positive reviews despite having shortcomings. Are you ready to defeat the titans of the mining industry and save Geodia from rotting away? Read below to know more.

In the world of Geodia, everything is kept together by Sparklite. It’s the life support of the planet. Inhabitants of Geodia have learned how to channel Sparklite safely for their own needs.

Sparklite is a blue, sparkling ore that can be mined using a rechargeable, low-level power source. However, some greedy people harness Sparklite by a surge of power, leaving others to suffer its consequences. The game features Geodia’s self-proclaimed baron who comes with an evil plan to mine the entire collection of Sparklite core and fulfill his selfish motives. By doing so, he wishes to repurpose the ore to use powerful war machines. The pollution emitted from sparklite consumption is also pollution the world. Animals and people of Geodia are experiencing poor living conditions.

The hero of his game must stop the baron of Geodia before he successfully extracts the entire collection of Sparklite and uses it to gain control of this world. The protagonist is a plucky mechanic who would use her presence of mind and practical skills to defeat the baron’s evil companions across five different zones in the game. The hero is assisted by the weird inhabitants of Geodia in her quest to stop the evil Baron. Thus, developers have also added interactive and communicative aspects to the game to make it engaging.

In short, Sparklite is a grind. To sum up, players need Sparklite, the local source of power to set up markets and upgrade their weapons and abilities. However, the only source of Sparklite is from Geodia’s surface. Players explore the distinct zones of Geodia, fight as much as they can, trying to survive to collect more Sparklite. Eventually, if they survive every round, they are expected to collect enough resources to build a ship, gadgets, and update specific amenities.

Due to the excessive mining activities happening in Geodia, its flora and fauna are already in ruins. The environment has started to rot away. So players have fled to a floating city named The Refuge. From this undiscovered land, players can use their resources to upgrade their levels, build gadgets, develop new weapons, and experiment in lots of other ways.

The events of the game go somewhat like this. Players explore each of the five distinct biomes with their companions. The map of Geodia represents five interconnected areas having different themes like grass, sand, forest, etc. Right at the beginning, the protagonist is dropped off at the anchor point in the grass-themed zone because it’s the hub of the four other surrounding regions. Every region starches for about 20 tiles only and there’s no scope for players to get lost. Also, this constant shifting between the five zones keeps away players from getting bored and frustrated. As you rediscover every tile, a map in the menu is redrawn. The only frustrating thing is that every time a player dies, he has to restart from the anchor point in the grass-themed zone.

Each of these 5 zones has a temple where weapons and equipment are stored. Players have to search for these minutes. Besides gadgets, there’s also a mine with a gauntlet for enemies, a large chest full of rewards. Close by the temple is a dungeon where titans reside. The insides aren’t very vast and very little time is invested in exploring these dungeons. The dungeon where the boss titan lives is just a dark room. Players don’t have to solve a puzzle or find a key to enter it. Once they enter, the battle begins.

Not all biomes can be explored at the beginning. A biome is only unlocked once the previous one has been conquered. Players can perform additional quests like solving puzzles or combating enemies to dig up more Sparklite for completing other activities.

The hero has access to equipment built from blueprints. To gather blueprints, she has to conquer minor dungeon-related challenges. Few gadgets are unlocked every time she defeats the titans inside dungeons. Soon, the protagonist has to learn how to use the gadgets to defeat titans and build the gadgets in the hub world. This is enjoyable break players get between the slash combat and exploration and hack moments.

Every time a player drops down to Geodia in one of the five major areas, the layouts all change. However, while the layouts change, the screens stay the same. So, its players will wind up hitting the same screens dozens and dozens of times as they explore the world, and that can get boring as the experience rolls on.

When players die and are dropped back to the anchor point, the layouts all change. However, the screens remain the same. So, players end up hitting the same screens multiple times as they explore the distinct zones.

With all these incorporations, Sparklite is a different action-adventure release. It’s a new effort in the rogue-like genre. Though it has evident flaws, it’s enjoyable and interesting. Half the fun of this game lies in exploring the various zones and completing quests. Players love to enjoy the scenic beauty of the zones. Developers have incorporated stunning visuals and graphics to further intensify the game’s ambiance. The rest of the gameplay offers enough content for players to explore. The game is overall enjoyable with a plethora of gadgets, weapons, and equipment that are available to players. Thus, besides adventuring and the gameplay also allows experimenting.

Sparklite is a thrilling, engaging action-adventure video game featuring an ever-changing land that’s on the verge of getting ruined. Players enter the land to save its animals, inhabitants, and environment. To do that, they are required to collect Sparklite, solve puzzles, build gadgets, defeat titans and do a lot of other activities. Explore dangerous corners of this land and do whatever it takes to stop the baron and his evil companions from accomplishing their evil designs. To know more about this game’s feature, read below.

The graphics and scenic beauty of Geodia are captivating. Players love to explore the 5 different biomes of Geodia and stare at the bare beauty of nature. The aesthetics incorporated into this game is amazing.

The soundtrack is original and unique. It is rightly incorporated to enhance the ambiance of the game.

The region of Geodia is vast and beautiful. Five different biomes are interconnected and offer huge space for players to explore and discover. Besides every biome has a temple with hidden resources.

Collect as much Sparklite as you can and invest in building gadgets and other inventories. The more weapons you have, the better will you be able to fight against the titans.

The protagonist is assisted by the locals of Geodia. Thus the game is interactive and communicative, providing more scope for players.

Sparklite is an amazing rogue-like video game that offers professional mechanics like never before. Players love various aspects of this game despite its flaws. Critics mostly love it for its amazing visuals and interactive nature. Developers are still working on this game to make necessary improvements. 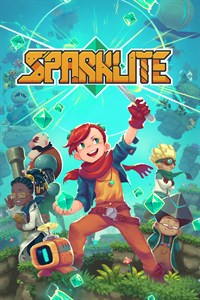 The game can be played on various consoles like Mac, PlayStation, Xbox One, PC, etc.

Does the game support a multiplayer mode?

No, players can only enjoy Sparklite in the single-player mode.

How long does it take to complete Sparklite?

The longest it can take to complete playing Sparklite is about 10 hours.