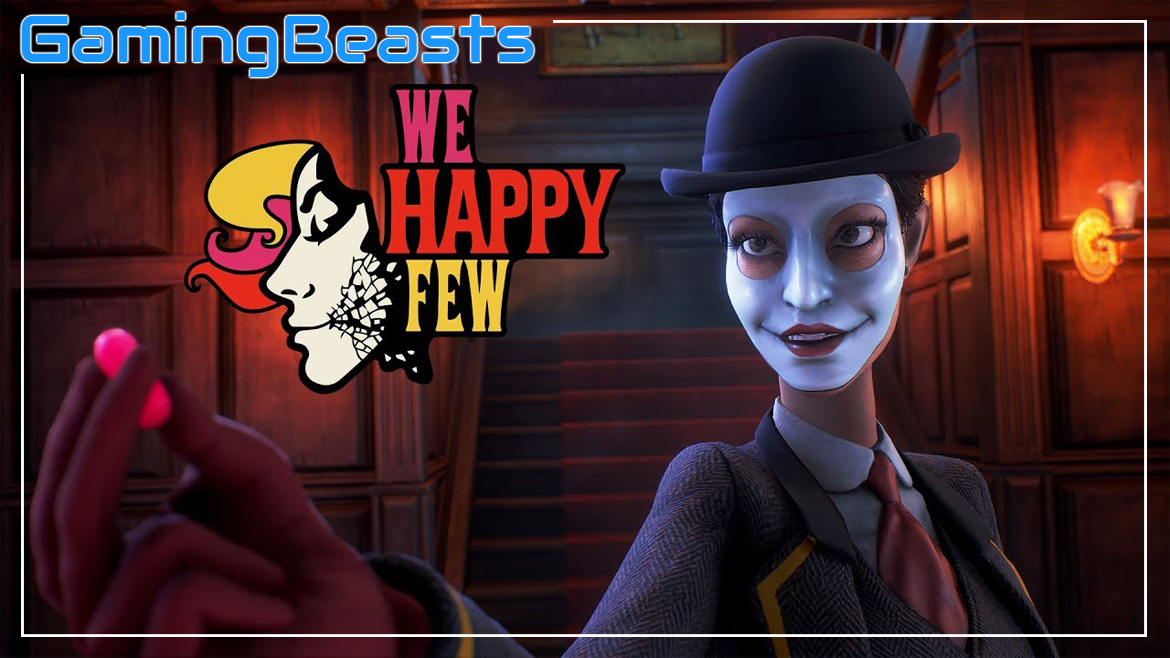 We Happy Few is a horror survival video game that has the best storyline. If you are a beginner you can try this game. The game is not that simple to crack and not that hard to understand. It is not easy to criticize a game that offers so much in terms of features. It provides many challenges and targets to accomplish. The more targets and goals the player completes the more rewards and skill points the player receives. Read out the whole article to learn more about the game.

The ‘We Happy Few’ is a video game developed by the Compulsion Games and published by Gearbox Publishing. The genre of the game is based on action-adventure; it is a survival horror game. The game was released on various platforms on 10th August of 2018. The game is available on Linux, Play Station 4, Microsoft Windows, and Xbox One.

We Happy Few horror survival video game was designed by David Sears and programmed by Matt Robinson. The mode of the game is single player. And the best part of the game is that the game is based on the first person’s perspective. The storyline takes place in the mid-1960s following world wars. The developers tried to create a storyline that would have strong narratives. The design of the We Happy Few game setting is based on elements of British culture in the 1960s.

The game was directed by Guillaume Provost and composed by Nicolas Marquis, Jon Licht. The player gets the option to choose any character from the three available characters from the campaign for playing. The whole score of yours would depend on how long you can survive as the game is based on survival. The game has also been nominated for various awards like Best Original Game and the Best Independent Game in 2016 by Game Critics Awards and others. The game has also won awards for Best Writing in 2019 by Webby Awards.

The game ‘We Happy Few’ is an action-adventure horror survival video game. The game is played from the first-person viewpoint, which includes elements like survival and stealth games. The player would control anyone among the three characters, every character has their abilities and skills, and also their own set of reasons to escape village of the Wellington Wells.

The first character Arthur Hastings is a well-balanced type of character who is an expert in crafting weapons. The second character Sally Boyle is well skilled at crafting and sneaking chemical concoctions. The third and the last character, Ollie Starkey, well trained at crafting the powerful explosive. He is the strongest melee fighter.

The game also uses the procedural generation for creating layouts of a section of the game at the very start of every playthrough. Every act introduces the player with a story target with series of quests to be followed, though there are optional quests also which the player can complete to achieve additional rewards. The player can improve the attributes of the character and provide them the new abilities, and may also get rewards and also skill points by completing objectives.

The player may collect items, drink and food, melee weapons, and also wealth all over the game. The items could be used to craft varied tools for progressing in the world of the game, like medication, lock picks, or healing balms. The food in the game is used for maintaining thirst and nourishment as the improved health also increases the attributes of the player.

The features of the game are what matters the most. This game has amazing and incredible features that grab all attention. A few of the remarkable features are mentioned below to give the beginner an overall idea of the game.

The game has a single-player mode which helps the people to play the game all alone in the comfort zone of their room. Sometimes, you would not want to play the game with others as you do not want to show your low score to your friends and being taunted for not playing the game well. SO, it is the best game to play in such cases.

The genre of the game is what excites most of the players towards the game. ‘We Happy Few’ is an action-adventure horror survival video game. The game has many challenges in between the game which brings excitement in people while playing the game. If you are an adventure-loving person then this is the game you need to start with your gaming experience.

The game is the best video game as far as the storyline is concerned. The game has three characters in it, where the players can choose as to which character they would want to play. Each character has their skills and reasons to reach their destinations. The game has also won the Best Writing Award by the Webby Awards in 2019.

The theme of the game is impressive. The overall concept of the game is astounding. The game is based on the horror survival genre. It includes a lot of challenges and adventures in it as well to grab and retain all the attention of the player to play the game.

It is really fun to play the game. This is the game you must try if you have not tried till now. If, you want to spend your valuable time, to play a game, and do not want to waste your time deciding which game to play, then, do not worry this is the game you need to start playing. And you would start loving the game gradually.

These are some of the notable features of the game and few reasons why you should play the game at least once. So, purchase the game as soon as possible to enjoy playing the best horror survival, action-adventure game.

Why is the game banned in the country of Australia?

Where all is the game available?

The game is available on various platforms like Linux, Play Station 4, Microsoft Windows, and Xbox One.

If you are an action adventurous person and love the themes of horror then this is worth playing.