Devil May Cry 4 is an action-adventure game and is the fourth installment of Devil May Cry. The game is brilliantly written by Bingo Morihashi. Hideaki Itsuno is the director of the game. The hack and slash game was developed and published by the Japanese video game developer and publisher, Capcom. It was released in 2008 for the platforms of Windows, PlayStation 3, and Xbox 360. The story revolves around a teenage character Nero.

Nero has demonic powers and is set on a mission to stop Dante after he kills the kind of the Order of the Sword. The player plays the role of both Dante and Nero as they both get involved in fighting enemies by using a variety of weapons and demonic powers. Devil May Cry 4 is the first game in the series that is released for multiple consoles. Each version of the game has similar visual quality because of the MT Framework game engine. The character of Nero was developed to attract new players. The game received positive feedback from the critics and the players.

Devil May Cry 4 is a highly acclaimed game that bagged recognition for Nero’s character, visuals, and challenging difficulty levels. The game became so popular that it was able to sold over three million copies worldwide. It is a stylish action game that is boosted with new game modes and playable characters.

In the game, the player can take control of five playable characters in the special edition of Devil May Cry 4. The game engages the players in a gothic supernatural world. In this world, a new protagonist encounters a familiar hero. When playing as Nero, the players would release, smashing attacks and non-stop combinations using an extraordinary gameplay mechanic. Apart from Nero and Dante, there are several other characters in the game.

The other characters with new appearances are Agnus, Gloria, Credo, Kyrie, and Sanctus. Two of the returning characters are Trish and Lady. The duration of the game is divided into two separate characters and their specific storyline. The player starts off the game with the main protagonist named Nero, who adds several aspects to the gameplay.

The gameplay of Devil May Cry 4 is similar to its predecessors. It has a special resemblance with Devil May Cry 3. The hack and slash adventure game allows the players to navigate through the game with enormous levels and slaying the demons. The game is played from a third-person perspective. The game emphasizes methods to deal with the enemies in the form of a Stylish Rank Gauge. Players can achieve style points by defeating the enemies with projectile and melee weapons.

The Devil Binger achieves new abilities in the game, which includes being able to detect the various secret mission of Red Orbs. The player plays Dante through seven missions, which take away half of the game. As Dante, the player has access to several ranged weapons and melee weapons, which he achieves after the completion of the boss battles.

Devil May Cry 4 is a stylish action series game that has new playable characters with unique gameplay mechanics. The game has remarkable features as well. We have mentioned some of the features here. In case, you are new to the game, you can read along.

There are three new playable characters introduced to the game of Devil May Cry 4 and they are as follows:

The game allows you to fight a huge number of enemies together with the legendary dark knight mode. This mode has extra difficulty levels and gains maximum satisfaction to the players.

The makers of the game have made few adjustments to bring improvement to the gameplay tempo. It’s done for a better experience for the new players and the returning players. A signature blend of swordplay and guns are another significant feature of the game.

Devil May Cry 4 is a hack and slash game full of action and adventure. The gameplay of the game is similar to the previous games of the series. The stylish action game has significant game modes and new playable characters that make the game even more interesting. You will get to enjoy 1080p stunning visuals at 60fps. The spectacular gameplay is satisfying to play and exciting to watch. The soundtrack of the game is composed by Tetsuya Shibata and it is simply amazing. The developers have put in a lot of effort to make the game as close to a movie. The voice actors have done a brilliant job by giving a great interpretation of the characters. 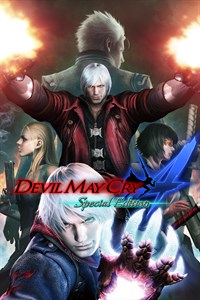 Who wrote the game of Devil May Cry 4?

The game is written by Bingo Morihashi and directed by Hideaki Itsuno.

What is Dark Knight Mode?

Dark Knight Mode is a new difficulty mode, which displays more than 100 enemies in a few missions at once.

Is Devil May Cry 4 worth it?

If you are fond of action slash games, then you will like the game of Devil May Cry 4.