The name “Uncraft World” seems to be very uncommon right? What might be the reason behind such a name? If you are interested enough to know about the game then let us not waste any time and rush to the gameplay of Uncraft World. This is no ordinary game but players who are into action and some weird stuff; can of course go for this game. Uncraft World is a very interesting game that can entertain the players a lot. Get back the feeling of playing retro games in this 21st century and enjoy the moment for some appealing pictures that can take your breath away.

Studio TeamShuriken has developed fantastic gameplay; players can have a great time as the king. Focus on your virtual character that wears a jetpack and can fly along with that. If anime characters attract you then go for it. Uncraft World was released on 25th September 2015. It is the sequel of Uncraft Me; gamers must have heard of this game and knows about it.

Uncraft World is similar to its predecessor but this time you will deal with a very challenging surrounding and achieve the goal. Uncraft World is a famous sequel to the series Uncraft. From flying off to landing; everything is difficult in Uncraft World; can you face the challenges and do the needful. Have a wonderful time flying across this virtual world and have lots of fun.

How to play Uncraft World?

Uncraft World is very difficult to play because the jetpack can only sustain for five seconds. Either you collect the stars or deal with the jetpack because with the help of stars your character can fly longer. You will see many blocks on the screen from which you need to pass to the other side. Fly across them and avoid the hurdles. Rollers are placed in between the block; once you get there, the game will be finished.

At the end of each round, the most interesting part arrives – find the hidden chest in the level to complete the gameplay and enjoy the sexually suggestive images. Jump through various platforms and score accordingly. The game looks very simple but in Uncraft World you must know from where to jump so that your character does not fall on the roller. Measure the distance and jump at the right moment to fly across every hurdle. You must save the galaxy and its hot goddesses.

Uncraft World is a very interesting game, especially for the ones who are into anime. There are multiple goddesses in this game and you can take a glance at their beauty. The features of Uncraft World are impressive as well.

This game has more than fifty levels; your journey will stay longer than you think of. Keep playing them and by completing each level you can save on goddess. The levels will get tough as you proceed in the gameplay and each of them is distinct from the other.

Now you can know where you stand among all the other players. Uncraft World can be played online so that the gamers can connect with the other players and have fun. Share each other’s strategies and make new friends outside the gameplay.

Newcomers no need to worry about the difficulties; Uncraft World has an amazing feature that can help you to change the difficulty level. The level editor will help you to set the challenges according to your gaming skills. You can increase it or decrease it at any time.

Players are free to choose the colour of their character. Uncraft World features 27 hero skins, choose any one of them and begin your gameplay. You can change the colour of the suit too, making the protagonist a mini version of yourself.

In Uncraft World, the players can see multiple goddesses and save them from danger. They are flawless and look extremely beautiful. Your eyes will be pleased when you see the pictures at the end of every level.

You are more or less aware of this game; now it is the time to explore the Uncraft World from your side. Stay tuned to the galactic journey and keep winning so that you do not miss out on any of the pictures. This game is all about entertainment and you will get that. Start your day with nothing and then end it with the collection of a beautiful goddess. 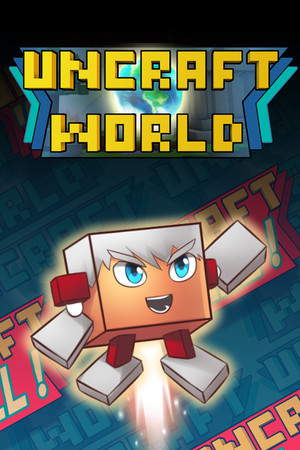 You can download the latest version 9.0c of Uncraft World.

Is there any workshop integration?

On which platform I can play Uncraft World?

This game can be played in Windows XP SP3.